Classification: a process of grouping things together or naming things based on their similarities or identification. ... more

Elliptical galaxy: a galaxy with little shape; it looks like a cloud of stars ... more

Galaxy: a group of stars that are held together by gravity ... more

Irregular galaxy: a galaxy that does not appear to have a typical shape ... more

Spiral galaxy: a galaxy where the stars, gas and dust are grouped into arms that twist around the center ... more

Star: a ball of hot, dense material held together by its own gravity ... more 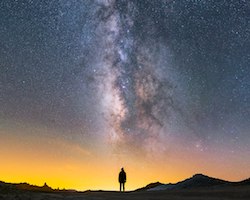 If you had a rocket ship, where would you go? Past the moon? Past all the planets in our solar system? Maybe even outside of our galaxy, the Milky Way? What would you find out there?

It turns out you would find millions more galaxies like our own Milky Way. They don’t all look like the nice galaxy that we call home, in fact they come in all sorts of shapes and sizes.

The Gravity of Galaxies

You’ve probably been told “What goes up must come down”. When you throw a ball up into the air, it comes back down. This is because the gravity of Earth pulls the ball down toward the ground. Galaxies have their own gravity that acts in the same way.

Galaxies are huge collections of stars that are all pulled together by gravity. This gravity keeps stars, gas, and dust all grouped together. In the same way that gravity on Earth pulls on the ball, the stars are constantly being pulled toward the center of the galaxy. 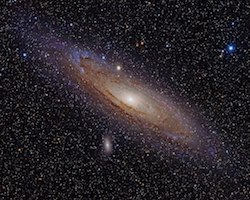 We can see these galaxies from Earth. When you go outside and look up at the sky on a clear night, you can probably see hundreds or thousands of small points of light. Most are stars just like our sun, some are planets, but others are galaxies containing billions of stars. Astronomers used telescopes to look closer at these galaxies and found that not all galaxies look the same. To be able to compare new galaxies to old ones, they began to classify them into different groups.

Edwin Hubble (1889-1953) started to organize galaxies into what is called the “Hubble Sequence”. Edwin was one of the first people to notice that some of the points of light we see in the sky are actually distant galaxies. After studying pictures of these galaxies, he began to see patterns. He formed three groups of galaxies: elliptical, spiral and irregular.

In the same way you can pick out a series of colors between red and blue, Edwin noticed a series of galaxies that were related by their shapes. Take a look at the diagram below, does it look like one galaxy is shifting into another?

On the left are elliptical galaxies; they are recognized by the fact that they are circular blobs of stars. Moving to the right, the blobs start to have more shape until you see a pinwheel shape. This shape is from the spiral arms, which is why we call these galaxies spiral galaxies. What if a galaxy doesn’t look like any of these? Those are called irregular galaxies.

There are other shapes such as ring and lenticular. There are even smaller galaxies known as dwarf galaxies. However elliptical, spiral, and irregular are the most common.

For a while, astronomers thought there might be a connection between the shapes. Maybe as galaxies age, they turn from one shape to another, moving along the sequence. Would it be possible for one galaxy to look like each shape throughout its lifetime? 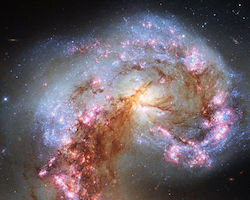 It turns out that this might be true. By looking at what color the galaxies are, astronomers are able to estimate how the age of the galaxies. It appears that spiral galaxies are young with many hot blue stars in them and ellipticals are old and full of old red stars.

So how do we decide what type a galaxy is? The same way Edwin Hubble did. Astronomers look at pictures of galaxies and look for special features - like spiral arms - to classify new galaxies. However, sometimes galaxies can be given the wrong label. As our pictures get better and we learn more about each type of galaxy, astronomers can re-classify galaxies if they seem to no longer fit into the shapes Edwin Hubble first noticed. 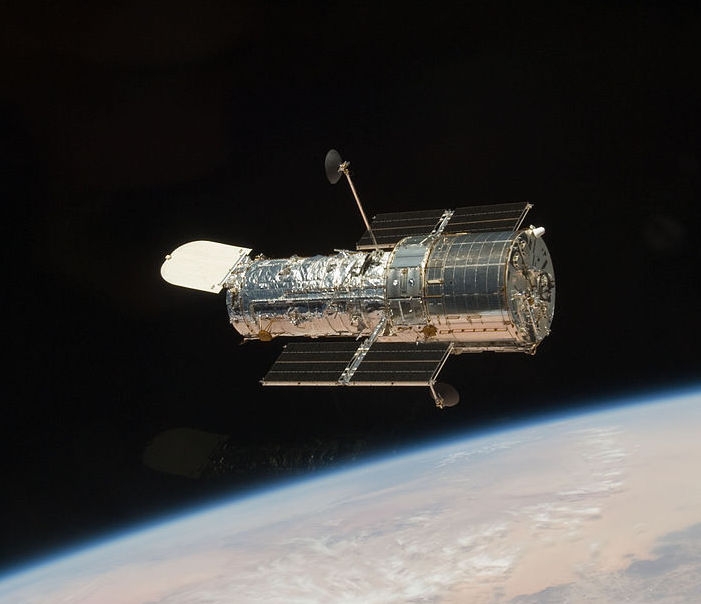 The Hubble Telescope orbits Earth, taking pictures of bodies in space, such as galaxies. Sitting beyond our atmosphere, it can get some of the clearest images we have of far away galaxies.