Mantle: the layer of a planet that is found between the core and the crust ... more

Meteorite: a rock from space that lands on Earth ... more

Meteoroid: a rock in space that is somewhere between a pebble to a meter-wide boulder in size ... more

Molten: something that is liquified due to heat.

Radioactive decay: when an element is unstable, it emits energy in the form of radiation and forms a more stable element. 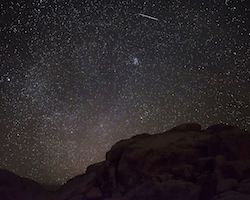 You lie back on the ground and zip up your sleeping bag to stay warm. Out here, under the dark and clear desert skies with very little cloud cover, every bit of space looks like it is studded with stars. A streak of light passes right through the middle of the sky—a falling star. But what you’ve just seen isn’t really a star falling from the sky. It’s a meteor: a rock from space that is traveling through Earth’s atmosphere. When it hits the ground, it is not a meteor anymore. Then it is called a meteorite.

Where do meteorites come from?

Most meteorites come from asteroids in the asteroid belt between Mars and Jupiter. Asteroids are rocky or metal bodies (objects) that revolve around the Sun. Asteroids are mostly leftovers from the processes that happen when planets are formed. They can range in size from that of a boulder to hundreds of miles across. 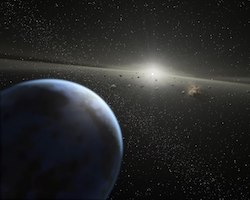 Objects smaller than asteroids are called meteoroids, and they are usually much smaller – about the size of pebbles. Some meteorites may also come from Mars or the Moon. When the orbit or path of an asteroid or meteoroid crosses Earth, it starts its journey through the Earth’s atmosphere (meteor) until it lands on the surface (meteorite). Then scientists can try to trace back where the meteorite came from.

What are meteorites made of?

Are all meteorites the same? No! They can come from different planets, asteroids, or meteoroids, or even different parts of the same object. Because of this, they can look different and can be made of different materials. 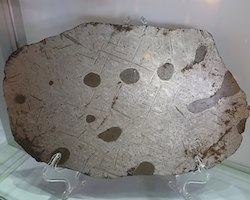 How heavy or dense a material is can be important for where it ends up. We can see how important this is if we travel back to what happened when our solar system and planets first formed.

Why are meteorites made of different materials?

Our solar system started out as hot gas. When gas clouds condensed, the Sun was formed and solids combined to form planets. The leftover solids that did not fall into the Sun or form planets became asteroids. Some of these asteroids had enough heat due to radioactive decay to melt. The metal (mostly iron and nickel), being heavier, sank to the center of the molten mass and formed the metallic core of the body. The lighter rocky material floated on top and formed the mantle and crust. It is similar to how oil (lighter) floats on water (heavier).

But not all asteroids melt. Some asteroids do not have enough radioactive heat to melt them. In such asteroids, the minerals (metal, silicates, etc.) are all mixed together. Meteorites from such asteroids are called chondrites and they are stony meteorites. 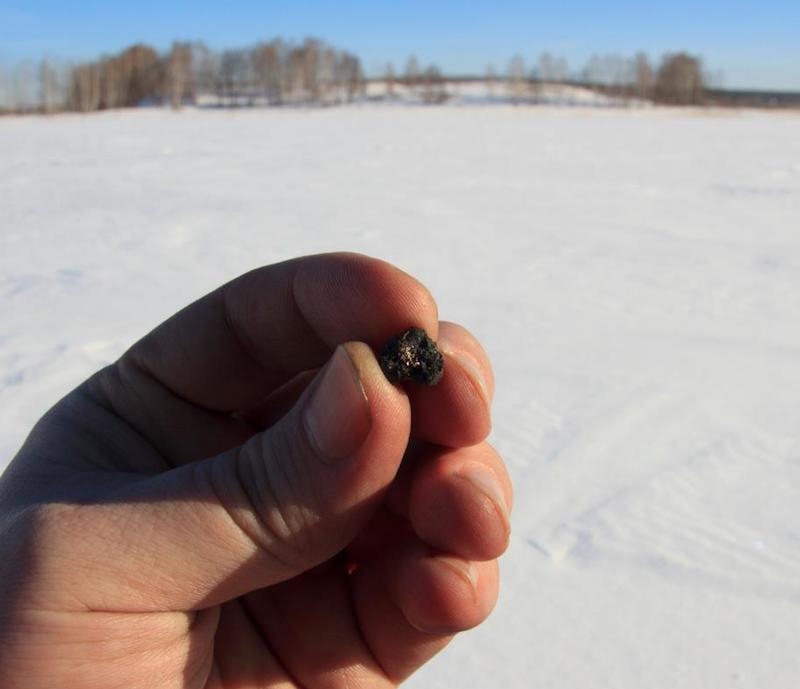 Meteorites vary widely in size, from small pebbles to large boulders. This small meteorite was found in 2013 at Chebarkul lake, in Russia.