How Are Basalt Columns Formed?

You’ve been walking on the bubbly rocks of an old lava flow for what seems like miles. Though the rocks under your feet change in color and shape, many look similar… small, worn, and full of tiny pockets. Up ahead, you see what looks like a normal hill. But as you get closer, one side of the hill starts to look like a sculpture. It has long lines—columns of rock that look at least 30 feet tall, stacked alongside one another. 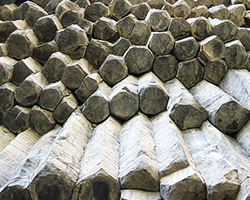 You are looking at a type of formation called columnar jointing. These columns of rock are most likely a volcanic rock called basalt. (Basalt makes up about 90% of all the lava rock on Earth.) How do these basalt columns form? Or, more specifically, how is it possible for it to form such perfect columns, many of which look like they are hexagonal cylinders? It’s due to a physical process that can happen in melted lava rock as it cools.

Imagine a huge flow of hot, liquid magma that is settling. The outer layer is starting to cool and darken in color from orange to black. As it cools, it needs to shrink a bit, as hot materials usually take up more space than cooler ones. Because of this shrinking, the surface of the lava starts to crack. But this cracking isn’t always random.

In this case, the lava starts to crack into regular shapes. Those shapes are forming because of how the lava cools. It starts at different spots called “centers.” If those centers are evenly spaced, the forces that pull inward toward the centers end up creating different chunks of cooling lava that are hexagonal (6-sided), or close to it. The more uniform the material of the lava is (or basically how smooth and well mixed it is), the more evenly those centers pull. That means it is more likely it will cool into hexagonal chunks. Scientists also think that faster cooling, like when lava is exposed to water, may also help with the formation of these columns.

These chunks begin to form at the top layer of the lava, which is cooling the fastest. As lower levels of the lava start to cool, they are also pulled into the shape under each center. In this way, you get lava cooling and contracting down into these cylinders. It usually begins to shape from the top down into the middle or even bottom of the lava flow. This is how really tall cylinders can form. And even when the material is a bit irregular, these cylinders can still form. They just might not be hexagons… instead of 6, they might have 5 or 7 sides, or a more irregular shape. 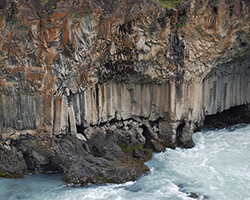 When they form long, straight columns, these are called colonnade. When they have more irregular shapes that look like they’ve been pushed or morphed, it’s called entablature.

Basalt columns have formed in many places around the world that have a lot of volcanic activity. They are well-known in certain places like Iceland, Ireland, and the United States (such as at the Devil’s Postpile monument in California), but they are found in many, many more countries across the world. And though these columns are usually made of basalt, that isn’t always the case. Devil’s Tower, in Wyoming (USA), is a good example. It is a huge structure of columns formed in a less common type of rock called phonolite. And rock columns also aren't limited to Earth... rock columns have even been found on Mars.

So the next time you are in a volcanic area that has old lava flows, keep your eyes peeled. You just might find some sculptures that were made by nature through the heating and cooling of melted rock. 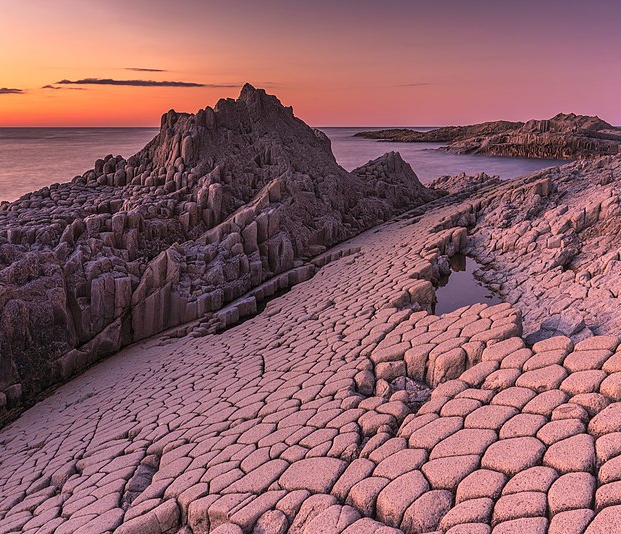 These stones along Cape Stolbchaty, Russia, may look like they were put here on purpose, but they are actually the tops of columns formed from cooling lava.