How Are Craters Formed?

Standing at the edge of a large crater can make you feel small, almost like an ant overlooking a very large bowl. A well-preserved crater here on Earth, Meteor Crater in Arizona, can make us feel that way sometimes.

Impact craters are generally “circular rimmed depressions” or bowl-like. They can range in size from so small that you need a microscope to see them, to covering a large portion of a planet. For example, rocks collected from the Apollo missions had microcraters that were as small as 0.0001 mm across. On the other hand, Mars’ Hellas Basin is 2000 km across, roughly the size of Alaska.

The Stages Of An Impact Crater

Impact craters are formed rapidly. A meteor enters a celestial body’s exosphere (or outer atmosphere) and then hits the surface. There are generally three stages to creating an impact crater: contact, excavation, and modification.

Contact is a fairly short stage where the meteor hits the surface and begins transferring energy to the surrounding rock. This energy transfer is really quite large and can be the equivalent of TNT, a powerful explosive. A shock wave is generated at this stage. 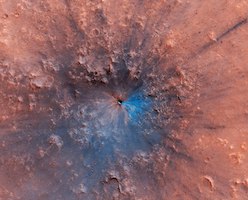 During excavation, the shock wave that was created during contact now moves outward, away from the impact. It throws material away from the crater while also heating it up. Some of the surrounding rock can even be melted or vaporized because the energy transfer is so intense. In addition to this, a lot of the surrounding rock is fractured and cracked. The shock wave can form cone-like fractures in the rock, called shatter-cones. Shatter cones are one way scientists can verify an impact crater here on Earth. The material that is thrown off outside the crater is called the “ejecta blanket”.

The modification stage is the last stage during this chaotic process. The shockwave has mostly dissipated and material begins to fall back down to the surface. Some of the debris still within the crater will slump downward toward the center. Most of the effects at this stage are due to gravity. Although, there are some larger craters that experience an upward rebounding force at this stage in their center and these craters are referred to as complex (rather than simple). Even though Meteor Crater (also called Barringer Meteor Crater) is over 1 km wide, it still doesn’t experience this force because it is relatively small by solar system standards.

This, in short, is how the cratering process works. Thanks for the great question! 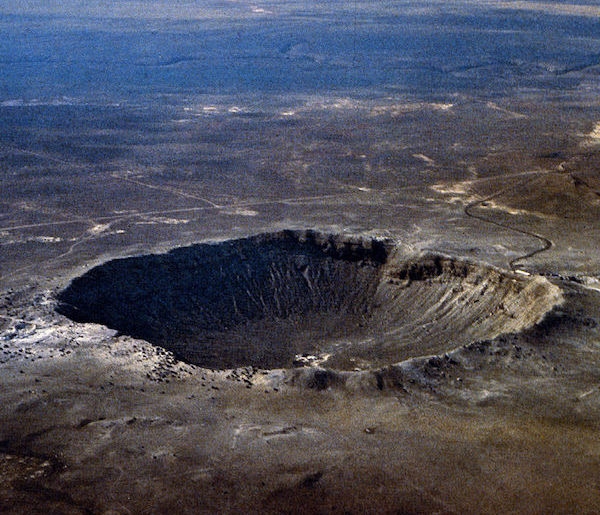 An aerial view of the Barringer Meteor Crater, in Arizona.