Cosmonaut: another word for astronaut; most commonly, a Russian astronaut.

Ignition: the process of starting the launch of a rocket, in which fuel is used to lift the rocket away from the surface of Earth.

Lander: a spacecraft capable of safely landing on a planetary surface. ... more

Planet: the large, ball-shaped objects in orbit around stars, particularly the eight planets in our own solar system.

Universe: all existing material and space that we can observe considered as a whole. ... more

Humans have explored space since we first looked up at the night sky. But even the brightest stars can be hidden by the glow of city lights. When you leave the bright lights of the city, the night sky shines above you. Looking up, there are thousands of stars, each one a twinkling point of light. Some are red, some are blue, others are white or yellow. 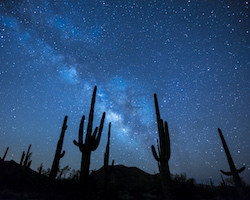 Our ancestors have been staring in awe at the same points of light in the sky for thousands of years. They noticed some that moved relative to the others. These moving stars appeared to wander across the night sky. Today, we call these points of lights planets. Planet comes from the ancient Greek word for ‘wanderer’.  Our ancestors started a long journey that we are still on today. This journey is the exploration of space.

Our Place in Space

Our cosmic neighborhood is known as the solar system. The sun is at the center of the solar system. It is surrounded by 8 planets made of rock, metal, gas, and ice. We humans live on the third planet out from the sun: Earth. Astronomers (scientists who study space) have learned that there are huge distances between the 8 planets. The distances are so large that they can be difficult to understand, let alone travel. Artist Josh Worth has created a useful tool to understand the distances between objects in our solar system.

Picture this scenario: if the solar system was the size of a football field (either American football or fútbol, as they are roughly the same size), the sun would be about half the size of a plastic bottle cap set at one end. The first four planets—Mercury, Venus, Earth, and Mars—would all be smaller than a grain of sand, and set within the first 10 feet (~3 meters) of the field, close to the sun. Jupiter, the largest planet in the solar system, would be the thickness of the edge of a coin and set about 32 feet (~9.7 meters) from the sun! The remaining three planets, Saturn, Uranus, and Neptune, would all be smaller than the writing end of a ballpoint pen! They would be 57, 114, and 180 feet (17.4, 34.7, and 54.9 meters) away from the sun, in that order. 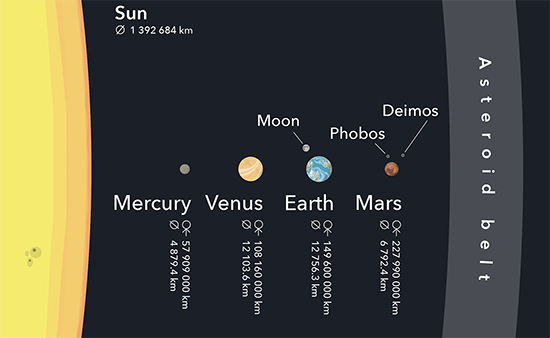 As humans began to understand the massive size of the solar system, scientists were learning about the age of Earth itself. Scientists were able to measure the time since these rocks had formed by measuring certain atoms in the rocks. They discovered that some rocks on Earth were extremely old. They were not just hundreds of years old, or thousands, but millions and even billions of years old. Earth, and the solar system as a whole, is estimated to be about 4.5 billion years old. That’s 4,500,000,000 years!

Further study of the universe outside of the solar system revealed it to be even older—about 13.7 billion years old! What’s more, the universe is much larger than our solar system. The nearest star to our solar system is extremely far away. This star, Proxima Centauri (procks-eema sin-tar-ee) is 100,000 times farther away from the sun than Earth is. Only within the last one hundred years has our place in the universe become clear.

These discoveries might seem scary because they make us feel small compared to the universe. However, humanity loves this kind of challenge. New technologies from the past 100 years allow us to explore space in new, exciting ways. While we used to only gaze through telescopes, now we venture into space. 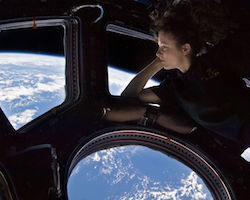 One of our gifts as humans is our ability to picture ourselves in places or situations that we have never been. This may explain our desire to wander in space, just like the planets. We explore the cosmos in books, movies, and games. This shows that we are eager to personally explore.

However, the exploration of space by humans has been more limited than that done by robots. In the 1960s and 70s (about 65 years ago), a burst of activity led us to explore the Moon. Since then, we have limited our in-person exploration to the space around the Earth, called Low-Earth Orbit, or LEO.

Our activity in LEO has taught us about what it means to live off of Earth. It has also shown us how different countries can work together to explore space. Friendly adventures in space prepare us for future exploration of the other objects in space, including the Moon, Mars, and beyond. Our thirst for knowledge continues.

The year 2019 is the 50th anniversary of the first humans landing on the Moon. Since then, over 500 people have lived and worked in space. Space has historically only been open to government agencies like NASA. In the past 50 years, space has become more open to private companies. The cost of sending people and equipment into space continues to shrink. This allows us to send more at lower prices.

We humans have a bright future ahead of us. Space offers us an opportunity to grow, experiment, and improve the lives of all people. We have dipped our toes in the ocean of space, and the water seems inviting. All we have left to do now is explore.

Read more about Humans: IN SPACE 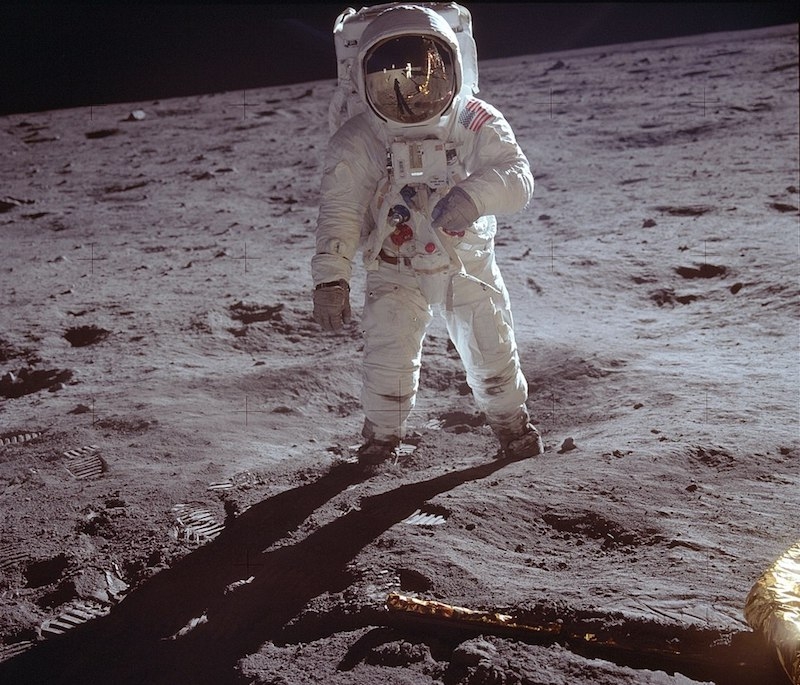 Buzz Aldrin, walking on the moon.