Flyby: an action in which a spacecraft passes close to another object without orbiting it. ... more

Mission: a specific travel assignment or trip into space.

Robot: any machine that completes a complex task, usually under human direction. ... more

Target: a desired destination or object. 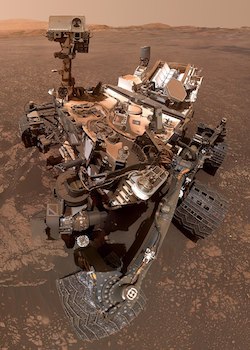 Human spaceflight is the most awesome way to explore the cosmos. Unfortunately, it is also costs a lot more than sending non-living robots. These robots do not require water, food, or air to breathe. Robots can also simply ‘sleep’ through the long journeys to the planets, a technique which is only available to people in science fiction stories.

Because of these challenges, a robotic spacecraft is usually the first to explore a planet. Generally, the process of robotic exploration has followed 5 steps:

1)    Earth observation of a specific target

2)    Spacecraft flyby of the target object

4)    Lander on the surface of the object

5)    Return of samples from the target to Earth.

Each step allows for better planning for the next step. The five missions described below represent these stages:

Step 1: Observation from Earth – Radar and the Chang’e 2 mission

An example of observation of future mission targets from the Earth is the use of radar to study asteroids. Asteroids are large rocky and metallic objects in orbit around the sun. They are the building blocks of the much larger planets in the solar system. 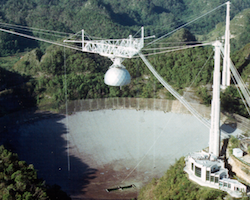 Radar measures an object’s size, shape, and speed. Earth-based observations of asteroids can even be used to study what they are made of. One example is the asteroid Toutatis (too-tah-tiss). It was discovered in 1989 and then flown by (Step 2) in 2012 by the Chinese mission Chang’e 2. The spacecraft took pictures and recorded data about the shape and size of Toutatis.

A recent example of a planetary flyby is NASA’s New Horizons mission to Pluto. Launched in January of 2006, New Horizons reached the Pluto system in January 2015. At launch, the New Horizons probe was the fastest human object in history. It travelled over 10 miles (~16 kilometers) per second away from Earth! At that speed, it would take you about 5 minutes to cross the continental United States. But because Pluto is about 40 times further away from the Sun as the Earth, the mission took nine years to get there! 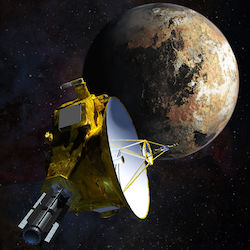 Note that this speed record has now been beaten: the Parker Solar probe, which launched in August 2018, will orbit the sun at a blistering 120 miles – 193 kilometers – per second! The New Horizons mission returned stunning images of the surface of Pluto. These images show that this icy world is one of the most geologically active.

The European Space Agency’s Venus Express spacecraft is studying the planet Venus. It is measuring changes of the atmosphere and surface of this planet. Venus is similar in size to Earth but has a very different surface and atmosphere. Studying Venus allows scientists to understand how changes in Earth’s climate may influence our planet’s change over time.

In November of 2018, NASA and its European partners landed a spacecraft on the surface of Mars. This spacecraft is called InSight. It carries science experiments that will investigate the interior of Mars. Because Mars is also a planet similar to Earth, this mission will allow us to compare these two planets. 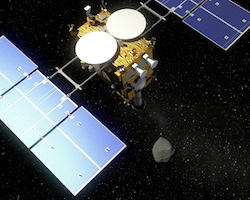 All of the above missions are large government projects. Space exploration has typically been entirely led by government agencies. However, that may change in coming years. What lies ahead for the future of space exploration?

Read more about Humans: IN SPACE 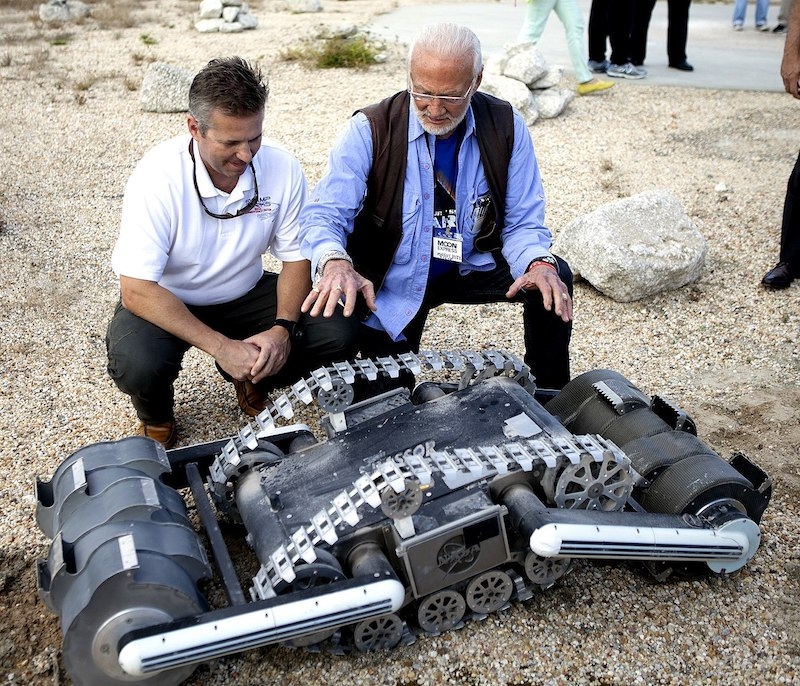 The robot RASSOR is built to dig into the surface of planetary bodies. Here, Buzz Aldrin (right) speaks with Rob Mueller (left) about this mining robot.