Extrude: to force out or push.

Fragment: to break large pieces of material into smaller pieces.

Jagged: something that has sharp pieces or sharp points sticking out of it.

Rubbled: material that has been ground up into smaller pieces.

Surface roughness: the texture of a surface. ... more

Volcanic vent: an opening of a volcano or a rift beneath a magma chamber. ... more

The explosive power of a volcano is a wonder to witness (from a safe distance), and shows how scary, yet beautiful, nature can be. Great plumes of smoke and ash rise into the air, covering the land in darkness. The ground rumbles close to the volcano’s base. From its vent, a molten, glowing red-orange material rises from the Earth. Beautiful fire fountains and streams black and orange pour across the land. 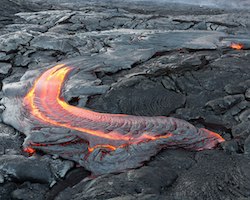 What is this material? The glowing red-orange material is molten rock from deep below the Earth’s surface. When it erupts and flows on the surface, it is known as lava. When lava flows, it creates interesting and sometimes chaotic textures on its surface. These textures let us learn a bit about the lava.

Try to think of these lava flows in the way you might imagine different thick liquids moving across a surface. Take ketchup and thick syrup, for example. Ketchup is thick, but not sticky, so as more is added, it moves easily and lumps will even out to make a smooth surface. A thick syrup moves slower, and is stickier, so as more is poured out, it might fold on top of itself. These different types of movements can help us classify different lava flows. A classic, smooth lava flow is like ketchup, while a rough lava flow is more like a thick or drying syrup.

A classic lava flow with a smooth surface and curved ripples and folds is known as pahoehoe. Pahoehoe is the name of both the lava type and of the whole lava flow. Pahoehoe lava flows are formed from eruptions that are not very violent, but that slowly extrude lava. This tells us something about what the lava flow is made of and how easily it flowed over the surface.

Pahoehoe lava flows cover kilometers of land and are typically only a couple of meters thick. To cover a distance that great, the lava would have to flow with little resistance and stay at high temperatures to keep moving. 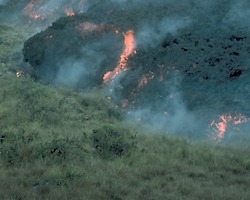 Now we have seen a smooth surface lava flow, but what about a rough one? A common rough surface lava flow is known as a`a, which in Polynesian means ‘to burn’. A`a is the name of both the lava type and the whole lava flow. The surface of a`a lava is made up of jagged, clinker, and rubbled material that is broken up as the lava travels further from the volcanic vent.

A`a lava flows a lot faster than pahoehoe and a`a are typically associated with eruptions that extrude lava rapidly. Because of its flow speed, the lava flow surface is disrupted and torn into pieces. If you want to understand how the material on the surface is disrupted, imagine stretching taffy. Once taffy has been stretched too far, it tears, just like the cooling lava.

The Speed of Lava

Pahoehoe and a`a lava flows give us a general idea of how rapidly lava erupted onto the surface and how fast the lava travelled over the surface. Their surface features are well known in the scientific community and have even helped scientists study and understand lava flows on other planets and moons.

But wait—pahoehoe and a`a are not the only lava flows out there. In fact, some lava flows are created when the cooled lava flow surfaces are being broken up into smaller pieces. 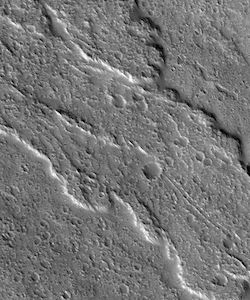 Volcanoes erupt in sequences. They erupt one set of lava flows, pause, and then erupt again with a second set. If there is a good time gap between the first and second flow then the lava flows from the first eruption have the time to cool and crystallize. When the second eruption starts, sometimes the new lava will flow beneath the cooled lava. This causes the cooled lava flows to rise and inflate.

Eventually, if the lava rises high enough, its cooled surface will break into small pieces. The surface will continue to break as long as the new lava beneath it continues to flow. The lava flow surface eventually looks similar to rubble piles found at construction sites. This is where it gets its name: rubbly pahoehoe. It looks similar to a`a lava flows but does not have the taffy tear features.

One last lava flow surface, probably the most unusual one, is called blocky lava. As the name suggests, this lava flow is made up of smooth-faced blocks; they are about a tenth of a meter to one meter in size. These surfaces are the roughest compared to all other lava flows and have even been found on other planets!

Orbiters and advanced ground-based observatories such as the Arecibo Observatory in Puerto Rico have been used to see rough lava flows on the surface of Mars. Studying the lava flows on Earth with surfaces similar to lava on other planets and moons can help scientists understand their volcanic history and the processes under the ground surface. 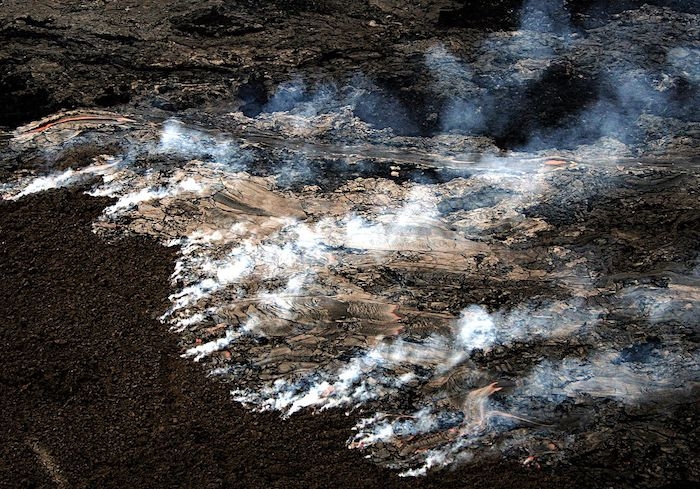 Lava flows often build on top of each other over time. Here, a new lava flow moves over an old one in Hawaii. Moss had grown on the old lava flow, creating smoke as the moss burns.