Composition: the different materials that something is made out of.

There have been dozens of missions to explore or observe asteroids and comets. Arizona State University has been involved with many of these missions, including the Lucy and Psyche missions currently under development. 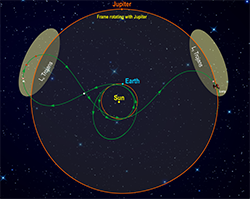 These asteroids are thought to be very old. They may hold information about some of the earliest formed materials in our solar system. Therefore, the instruments on the Lucy spacecraft are designed to carefully measure the composition of each asteroid. One of the instruments, called the Lucy Thermal Emission Spectrometer, or L’TES, was designed and built at ASU. L’TES will help scientists learn about both the chemical and physical properties of the surface of each of Lucy’s targets.

Psyche is both the name of the mission and the target asteroid. The Psyche spacecraft will start orbiting the asteroid (16) Psyche in 2026. Measurements of the light reflected by the asteroid, the heat it gives off, as well as its density suggest that its surface has a large fraction of metal. The spacecraft’s instruments are designed to collect images and measure particles, magnetic fields, and the gravity field to analyze and map metal versus rock in the asteroid. If the asteroid is indeed metal-rich, it may actually be the remnants of a planet. If a planet had its outer rocky layers stripped off in huge impacts, the planet’s core may be exposed and look much like Psyche. 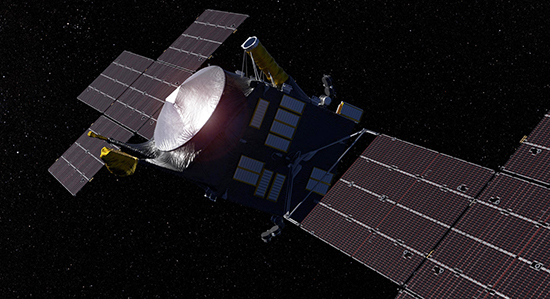 Much of the science leadership for the Psyche mission is based at ASU. The mission’s Principal Investigator (PI), Dr. Linda Elkins-Tanton, is a professor at ASU’s School of Earth and Space Exploration (SESE). One of the instruments on the spacecraft is a multispectral camera system. This instrument’s team is led by Dr. Jim Bell, another professor in SESE (Dr. Bell is also the mission’s Deputy PI). 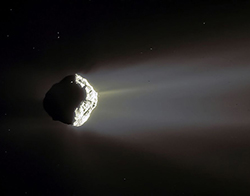 Landing on the surface of an asteroid or comet may seem like a space mission that only exists in movies. But that isn’t the case. In 2004, the European Space Agency launched a spacecraft called Rosetta. It studied both asteroids and comets, but its main target was the comet 67P/Churyumov-Gerasimenko. The Rosetta spacecraft carried a lander module called Philae. The Philae lander was the first spacecraft to softly land on a comet’s surface.

The Rosetta spacecraft was equipped with 11 science instruments. It collected data that would allow scientists to investigate many properties of the comet and its environment. In 2014, Rosetta reached and began orbiting the comet and, soon after, the lander touched down on the comet. Two years later, Rosetta was purposely crashed into the surface of the comet at about 2 miles per hour (~89 centimeters per second), effectively ending the mission.

The Deep Impact mission was designed to observe the nucleus of comet Tempel 1. The mission carried a large mass of copper that was used to impact the surface at about 10 kilometers per second (about 6.3 miles per second). This impact released a huge volume of material from the surface and subsurface of the comet.

Tempel 1 is roughly 7.5 x 5 kilometers (about 4.5 x 3 miles). The impact on its surface created a crater on the comet nucleus about 150 meters (490 feet) in diameter. The impact caused gas and dust to leave the nucleus for almost 2 weeks. The estimated mass of the material lost is about 5 million kilograms (11 million pounds)! Comet Tempel 1 was revisited by NASA’s Stardust spacecraft after the Deep Impact mission. The Stardust spacecraft took images of the surface and confirmed previous observations of the craters size.

Because of their diversity and mysterious origins, asteroids and comets are excellent targets for space missions. Spacecraft that have explored these objects in the past have greatly improved our science compared to what we can do just from Earth. Future missions to asteroids and comets will continue to increase our understanding of our own planet and the solar system as a whole. 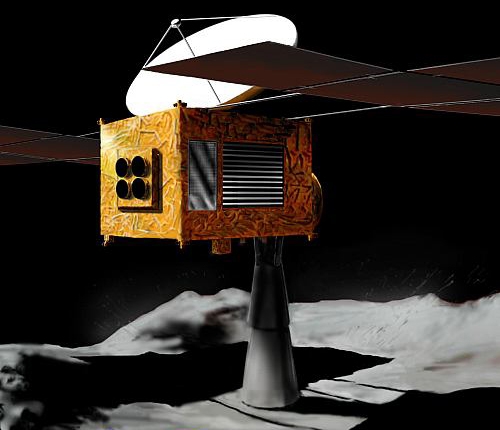 The Hayabusa spacecraft was part of the first mission to take a sample from a near-Earth object. The spacecraft launched in 2003, landed on an asteroid called Itokawa in 2005, and brought samples back to Earth in 2010.